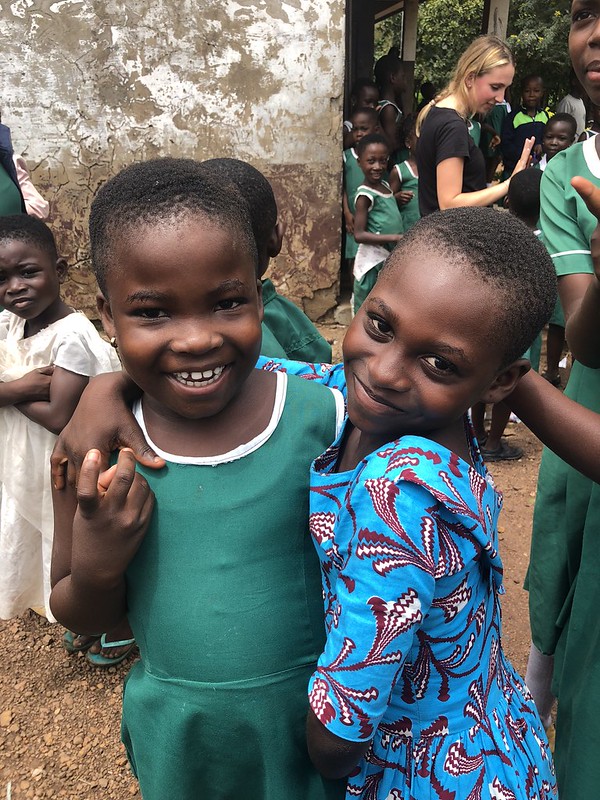 Ghana was probably the most memorable four days of my life. Filled with tears, laughter, joy, I can’t even begin to describe all the emotions I experienced. We arrived in Tema, Ghana and hopped onto a bus headed towards a small village called Senase in the northern part of Ghana. I participated in a program called the Senase Homestay Field Program, which I spontaneously signed up for two days before we reached Ghana. This last-minute decision was easily one of the best decisions I’ve made in my life.

When I arrived at my host family’s house, it was not quite what I was expecting. There were no toilets, no running water, no pillows, no blanket, no AC. I was thankful we at least had a mattress with a mosquito net, though. We spent the three days there volunteering at the local American school that was actually built by our tour guide, Fred, who has the most amazing story (read below). We also visited the local government school to see the difference and why it is so necessary for the Ghanaian education system to be improved. The American school had a far better ratio of teachers to students, and was more structured and organized. In contrast, the children at the government had little to no supervision and the classrooms were dirty and covered in graffiti. 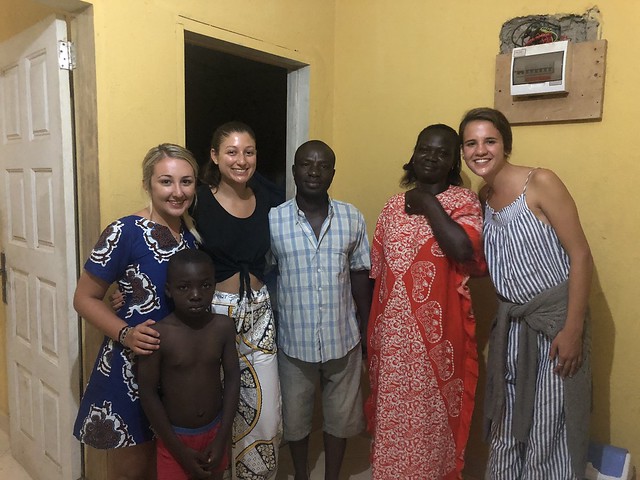 While we were there to help, I began to feel like we weren’t actually doing much. We had a way of floating in and then leaving. We move on to travel the rest of the world, while many of these kids have never left Ghana and likely never will. I realized that the trip was catered to us so we could see how privileged we are rather than having any real impact on the schools. This is why it is so important to donate to trustworthy causes, like the donation you will read about at the end of my article, so we can make more lasting improvements on these communities.

Also, throughout our program, we had many reflection sessions to discuss what we were experiencing. Seeing all the kids at the school, many of us wanted to take pictures to document the moment. However, one of the conversations we had was about knowing when to take a picture, and it was a discussion that has really stuck with me. In order to respect the human beings we were meeting, we were told to be weary of not just using the children as props in our photos, but doing our best to get to know them as human beings before shoving a camera in their face. I thought this was such an important concept to be discussed and emphasized because it is so easy to forget why we were visiting the school in the first place. A lot of the time, people from Western countries visit with the intention of posting on their social media to make themselves look good, in a “look what I am doing!” type of way. That one conversation we had during the reflection session made us all think twice about what we were doing and why. 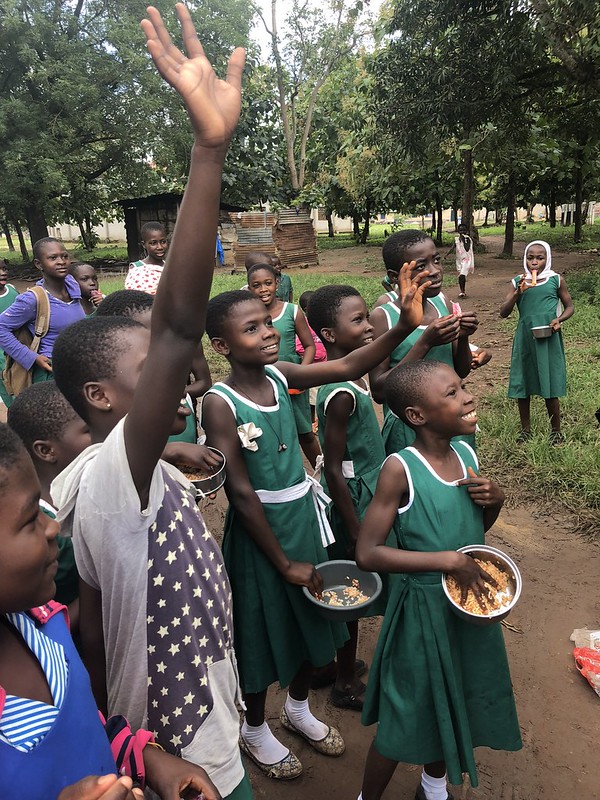 One last thing I want to say about my experience is the importance of understanding difference. Many people may look at communities such as Senase as poor and in need of help. But, as both an ethical person and traveler, it is imperative to see that there are both pros and cons to every community and living situation. While we have luxuries like air conditioning and shops to buy whatever we want, I felt in this Ghanaian village a family spirit that is missing in many American communities. Every community has areas that can be improved and it is important to realize that nowhere is perfect.

Whenever we came home to our homestay house, the entire family would be hanging out and talking in their living room. Siblings would walk to school together and check on each other throughout the day. Hardly anyone works late and instead is home in time for dinner. In contrast, many families in America have forgotten the value of just spending time together. Parents work late, and kids text on their phone or hang out with their friends or eat dinner in their rooms. There is more focus placed on success and making money, rather than spending precious time with those close to you. Ghana reminded me of how much I missed my family and encouraged me to not take time with them for granted anymore.

Anyways, enough about my experience. Fred was our tour guide the whole four days we spent in Senase. His story is one of courage, hard work, and selflessness that I think may just inspire you to change your life, like he did mine. I wrote this article for the Semester at Sea magazine. Read below:

From selling handkerchiefs on the streets of Accra, to an Uber executive, to running his very own school in Ghana, hear the inspirational story of one young Ghanaian and the role Semester at Sea played in changing his life.

Imagine visiting a school in a remote, small village of Ghana and seeing kids playing on a mini World Odyssey, the Semester at Sea ship, in the playground. This is what the SAS Fall 2018 students who participated in the Senase Homestay program were surprised to dsicover when they visited the Semanhyiya American School in Senase, Ghana. The school’s founder, Fredrick Benneh Frimpong, known as Fred, was a voyager during Summer 2014, but his relationship with SAS had started far before that.

But in order tell this story, I need to go back to Ghana in 1990. Fred was adopted at six months old in Senase, a small village of about 5000 people, by his mother who has also adopted around 25 other needy children (but that is a whole different story). Seeing the value of education from a young age, Fred walked two hours every day to complete junior high. After eventually graduating from high school, Fred moved to Accra, the capital of Ghana, with nothing but a dream and the will to change his life for the better.

He began by selling handkerchiefs and whatever else he could get his hands on to make money. It was around this time when he met Barbara and Mike, a lifelong learner couple that were interested in visiting his village. Fred saw an opportunity in this one experience, and founded his own tour company, Can Do Land Tours. He never lost touch with Barbara and Mike, who eventually became like family to him. They not only encouraged Fred to join the 2014 summer voyage, but also saw his drive and decided to sponsor him to attend the University of San Diego to continue his education.

In 2015, while at USD, Fred applied for a social innovation challenge and won the grand prize of $15,000, for his idea to build a school in his home village of Senase, Ghana. With this victory, Fred knew he was returning home.

While just starting to develop his school, Fred received an email from Uber. Turns out that one of his friends he met on SAS was now working at the embassy in Ghana and recommended him for a job with the company. After a long interview process, Fred was chosen to start Uber in Ghana and was later promoted to being in charge of Uber in all of West Africa. Fred’s time with Uber was short, however, as he decided to leave and invest all his time in his school.

“I’ve always been a hands-on kind of person, which is why I think I left Uber,” Fred said. “I don’t have to do phone conversations anymore, I can be here and really see it through.”

The Senase community immediately was interested in the school. There were more than 400 applications for 120 spots.

Fred focused on creating a place where kids would be excited to learn. The excitement just to be at school can be felt in the atmosphere from the very beginning of every day. The school starts the day with a dancing session for the kids, which is part of their morning assembly to get them ready to learn.

“Once kids love school, you don’t have to push so hard for them to learn,” Fred said. “A lot of the classrooms are more beautiful even than some of their homes. My goal was to create a conducive environment to learn.”

Even after all of this amazing success, Fred credits his son as his greatest accomplishment. Wanting to help someone the way he was helped, Fred adopted his son, Godfred, when he was around 9 years old.

“It’s not about material things,” Fred said. “It goes beyond giving money or uniforms to people. It’s a sense of kindness I feel proud about.”

Fred’s story is one of return. Returning home and returning the favors that helped him get to where he is today. He walks through the same village he once ran barefoot through as a child, but now as one of the most accomplished 28-year-old men out there.

Fred’s story inspired all the participants to take nothing for granted and give back to the community as much as possible. If there is one thing you take away from this story, know that anything is possible if you have enough passion and drive to make it a reality. 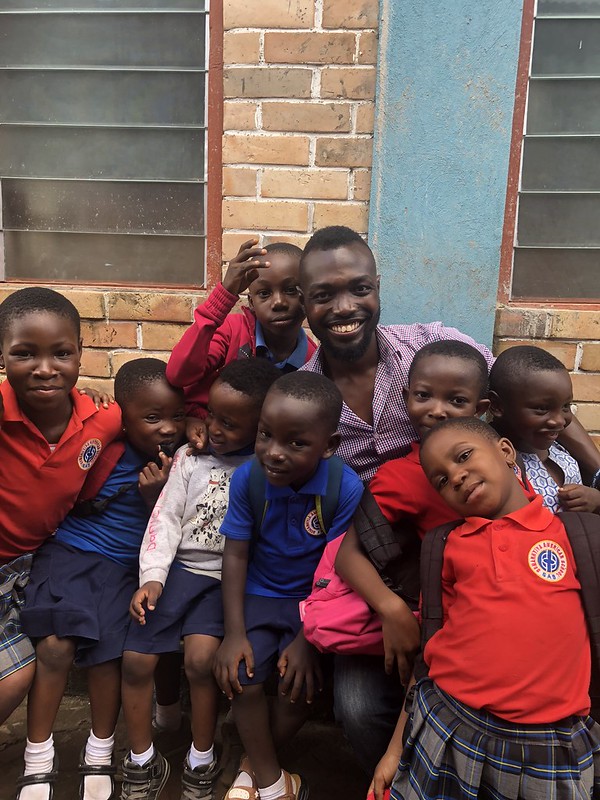 Fred is interested in creating a community park for the kids of his community. Donate to help at: https://www.gofundme.com/playground-for-senase