If you ever watched the old “How It’s Made” episodes on television and enjoyed watching the ever-so-satisfying assembly lines and machines put things together so precisely, then the  Volkswagen factory in Wolfsburg would probably be your paradise. Never have I seen such a large, modern, and complex factory. The Volkswagen production plant can be most closely related to a college campus or miniature city. The factory contains dozens of production buildings, including the press shop, testing center, melting shop, and assembly room, as well as other buildings that the employees might need – there are grocery stores, several gyms, multiple cafes, and a medical center, among other things, on site. You have to go through security to get onto the plant site, and no one is allowed to take pictures inside. It is all very well-regulated, which is not surprising, but I wish that we could’ve taken pictures inside because it was completely incredible. 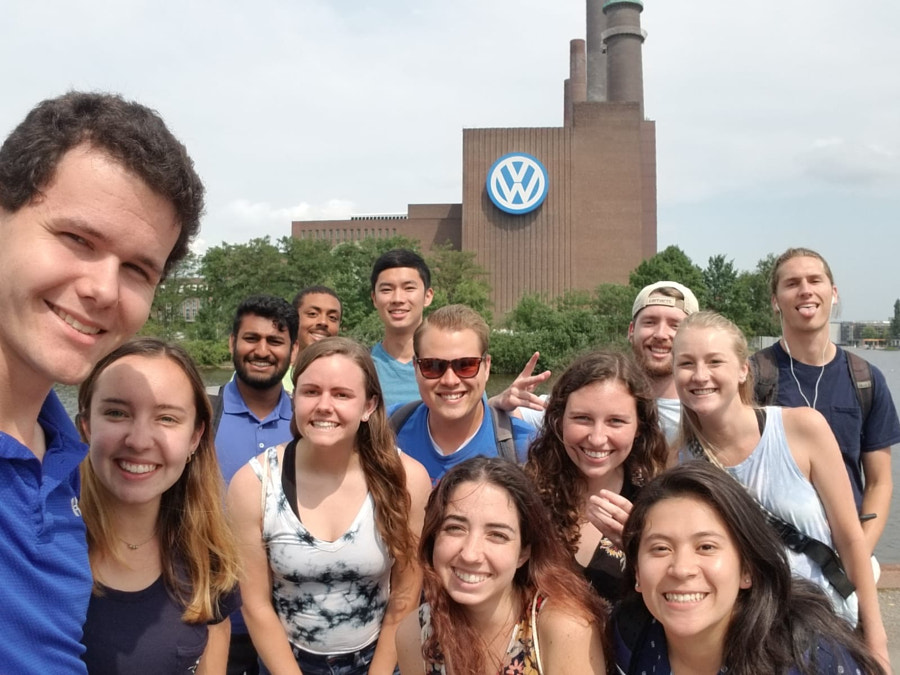 We got to tour the entire plant while being driven around on a long Volkswagen tram by our guide. I was so impressed by how high-tech the factory was, and how automated and optimized each process was made to be. It is no surprise that the carmaker has been in business for over eighty years, successfully making cars for people all over the world. I kept thinking of how incredible it would be to receive an internship with the company, although I’m sure the application process would be very selective (if even possible).

After the tour, we went to go try Volkswagen’s original curry bratwursts, since the company actually makes them on-site at their own slaughterhouse. When we arrived at the booth, it seemed to be sectioned off for some sort of event, and there were dozens of people in suits around. We were quite hungry, and then one of the men in suits told the people running the bratwurst booth to give us free currywursts. We were incredibly confused, but knew better than to refuse free food. We later found out that that was the grand opening of that currywurst booth, and all the people in suits were the Volkswagen CEOs who were attending the ribbon-cutting. Apparently, we got to try the currywursts before the Volkswagen CEOs, which we were slightly uneasy about, but it’s definitely a story that we will never forget.