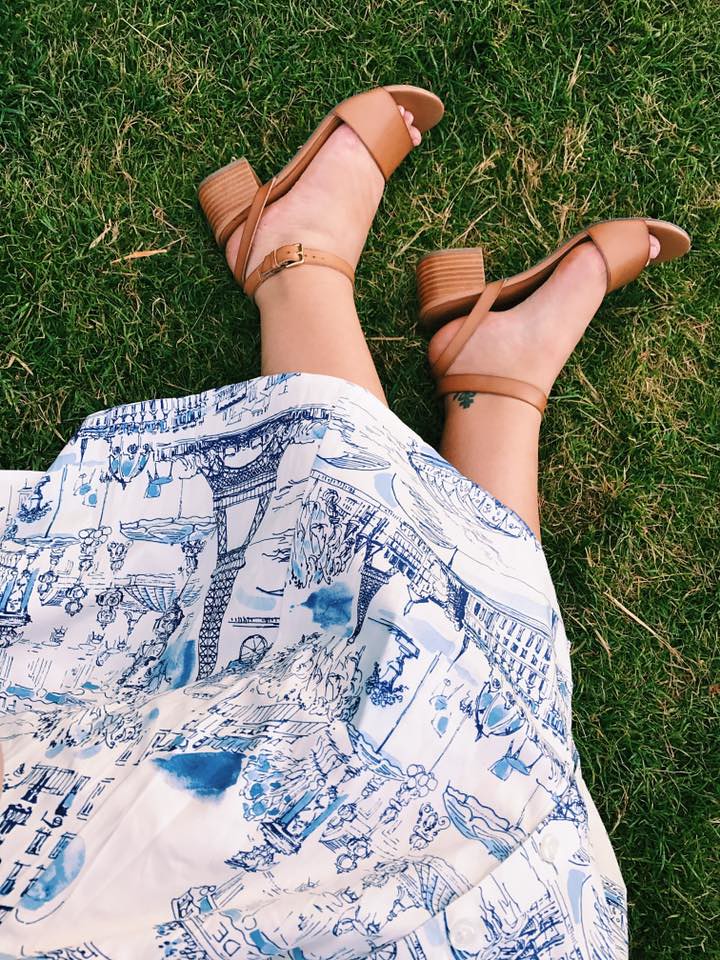 While planning excursions for my free weekends, the idea of Paris popped into my head. As stupid as it may sound, I wanted to go only so that I could go to Disneyland Paris. Disney is something so special to me, so to adventure into Disneyland in a new country across the world would be so cool! I pitched the idea in a study abroad meeting, and a couple people expressed interest. Only one reached out to me about doing it for sure: Alexa.

The two of us made plans to venture into this city for our short weekend, even though our professor recommended somewhere much closer. We had a rough plan to train there on Friday after class, spend Saturday morning at Disneyland, enjoy Saturday evening by the Eiffel Tower, and do a quick city tour on Sunday morning before training back to Frankfurt (Oder). Needless to say, it didn’t go that way at all!

When we starting looking into transportation from Frankfurt (Oder) to Paris, we were only seeing train rides for 12+ hours and for well over two hundred euro per person. That on top of Air BnB and food costs was something we didn’t want to pay for. Luckily, we found some relatively cheap flights from Berlin to Paris on Friday night, and we finally booked them after a few troubles. Who would’ve thought some problems with the easyJet website would be the least of our worries?

In our meetings, Dr. Harris told us not to make plans until after 4 p.m. on Friday the 12th, so Alexa and I thought we’d be safe with our 8:30 flight from Berlin. Then, we found ourselves sweating in class at 4:15 on Friday afternoon. We finally made it out of class and had to hurry back to our dorms by trams because ~of course~ we hadn’t packed yet! We threw a couple outfits into our backpacks and rushed back out to head towards the train station. Thankfully, we met a sweet girl from the Ukraine at the tram stop who helped us make our way to the right stop. We got off the tram and were walking at a calm pace when the girl turned around and said, “You’re moving pretty slow for someone who’s train leaves in six minutes!”

We made it into the train station purchased our tickets. 5 minutes left. We ran up to the first platform as posted on the sign. We made it up the stairs, didn’t see the destination Berlin, freaked out, and ran back down. 4 minutes left. We checked the departure list, and stumbled up the next stairs. Wrong again! 3 minutes left. A woman stopped us on the stairs, asked where we were trying to go, and pointed us one platform over. 2 minutes left. We basically fell down the stairs, and tore up the next one. 1 minute left. Jumped onto the train, and read “Brandenburg Hbf.” Doors closed. “Are we on the wrong train!?” Thankfully, the screen just hadn’t updated, and we were in fact, on the correct train. 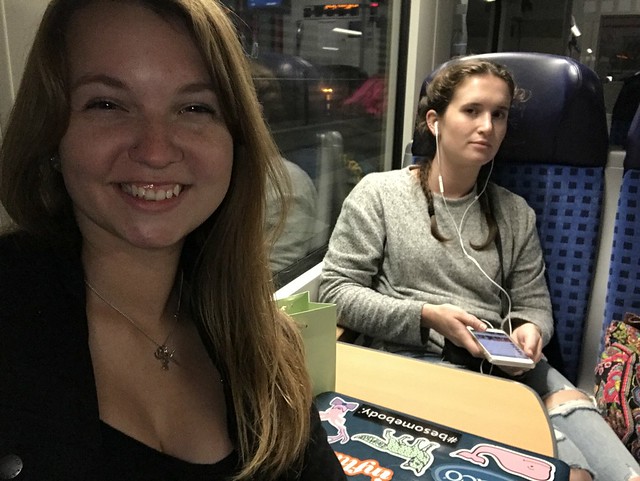 We sat on the train until getting off at the Google Maps suggested transfer station. When getting off the train, nothing seemed right, and we couldn’t find a train going in what seemed to be the desired direction. We walked onto a train and asked a woman if it was the right one, but she only spoke German. This is the first time a language barrier became an issue. We pointed to the words “Schönofeld Airport” and she and another man discussed the best way to get there. Finally, they were able to make out a couple English words, and direct us to a map to show exactly where we needed to make our next transition.

Making our second transfer was easy. We waited for the S9 to show up, hopped on, and arrived at the airport about twenty minutes before the gates closed. Nothing like leaving three hours early to almost miss your flight!

After an hour delay for storms, we made it aboard our flight, and eventually landed in Paris, France. It was rainy outside and we were too stressed to figure out local transportation. One $35 Uber later, and we made it safely to our Air BnB. Just as we got to our room and opened the windows, the Eiffel Tower started twinkling. Instantly, the stress from the day was gone, and I cried! It was incredible to see something so beautiful with my own eyes.

Alexa and I settled into our room, called back home, and turned in for the night. We decided against Disneyland, so we had no plans for the next day, and I’ve never been more thankful for that. We got up a little later than we had been used to for our past week, and got ready at our own pace. When we were finally ready to leave, we walked downstairs and to the little cafe next door. Alexa skipped breakfast to save room for our lunch, but I happily enjoyed my real French baguette and coffee alone. Alone is something I never want to be, but something about the environment made it very relaxing. That small breakfast was one of my favorites. 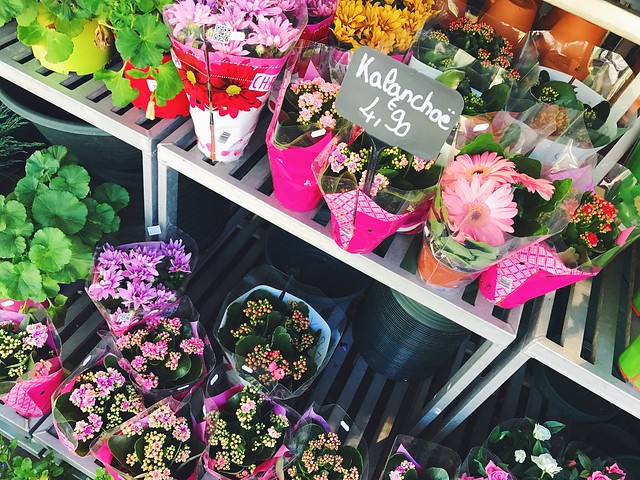 To start our day, we headed towards the Notre-Dame which was only a mere 2.6 mile walk. How could two girls make a long walk seem like less time? Shopping! We pushed off shopping as long as we could, but we couldn’t resist stopping into H&M. We walked in specifically to find pants for Alexa because her skirt was bothering her, and I said maybe a dress for me because I was warm in my jeans and sweater. Again, nothing goes as planned, so neither of us bought that, but we did buy something! I decided on an off the should top for a great price, and Alexa ended up with two new tops, a pair of heels, and a small purse. Oh well! 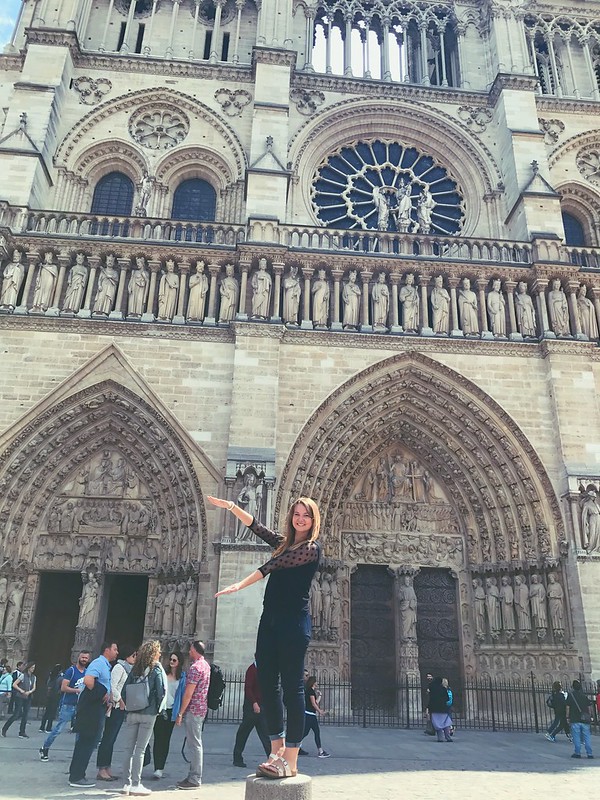 Continuing along our journey, we finally made it across the river and to the Notre Dame. I’ve never seen more beautiful architecture in my life. We stood there to take it in, and a couple pictures of course! A little cafe was just within eyesight, so we walked over and sat inside to enjoy the classic crocque monsieur. Alexa also had an outfit change. 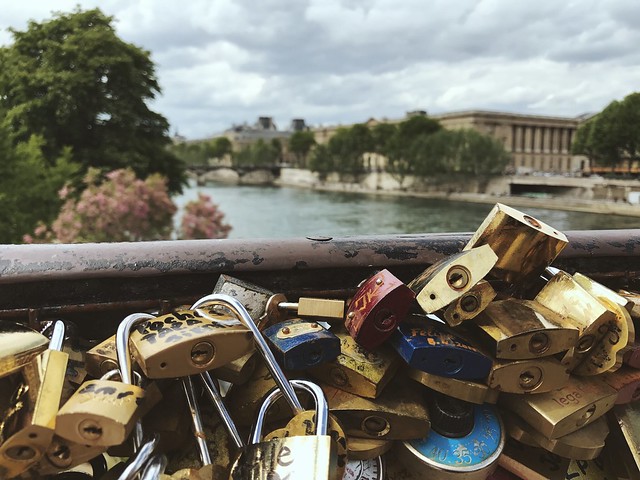 We left the restaurant and continued on to the Pont des Arts, or more commonly called, the Love-Lock Bridge. We watched as adoring couples signed their locks and added them to the collection. After a few of our own pictures, we left and made our way towards the Louvre. We had already done a pitstop with shopping, and Alexa’s bank account was crying for a break before we reached Chanel. So, both of us decided on settling for some dessert. We ended up at a gelato cart and took our times with the cones in the courtyard of the Louvre, where I had my outfit change. Since my purchased shirt was an off the shoulder top, I pulled it over my sweater until it was by my waist, and then jimmied it up underneath. Once fully up, I pulled my sweater off and shoved my arms in. It was much easier than it seemed. 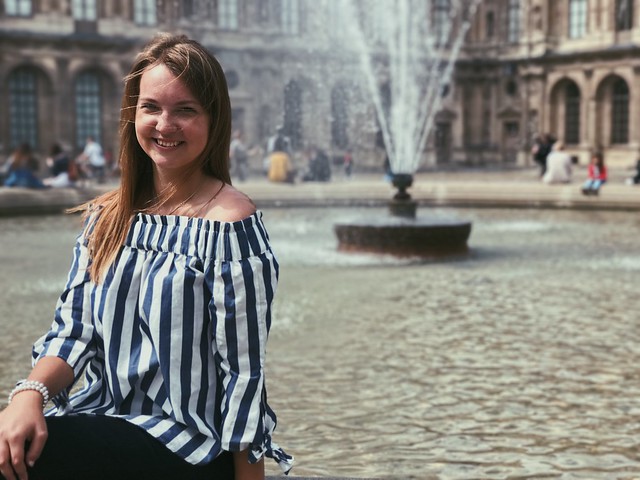 An outfit change called for one more photoshoot, so we took a brief walk over to the fountain in the center of the square. I sat on the edge as we took a couple pictures. The first few weren’t too bad, so we decided it was Alexa’s turn. I guess the fountain was over being sat on because a huge gust of wind came and we were showered from all the water! Alexa’s hair and back were drenched from sitting right there. We took a small laughing break, checked the wind, and tried again. As Alexa was filming a snapchat to discuss the terror she just had from the water, it happened again. We both shrieked, and I turned directly into a woman and collided with her—and it’s all on video! 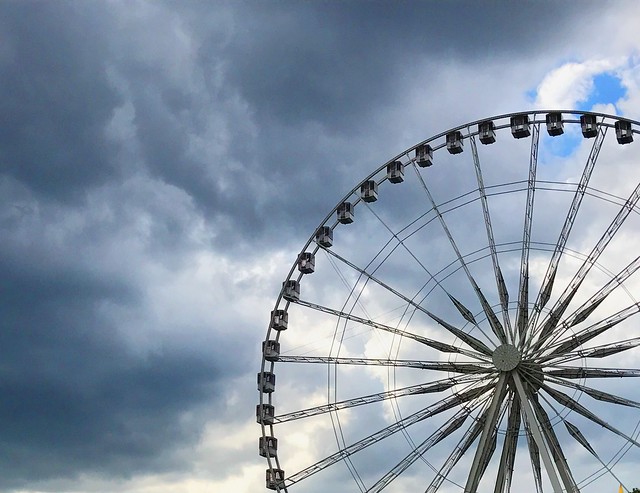 We decided to move on from the fountain, and continued on our walk towards the Arc de Triomphe. We could see it over the trees of the garden, but it still seemed so far away. And it was. More walking? More gelato! The two of us picked up another scoop and continued along the way towards our next landmark. We made it through the green gardens, ventured pass the ferris wheel, I bought some cheesy souvenirs, and then it was time for shopping again!

Once on the Champs Élysées, we window shopped at some stores, like the biggest Sephora I’ve ever seen, and actually made our way into some like Zara. Alexa showed extreme restraint as we walked by Chanel, and we both made the decision to not wait for Laduree for an hour. Finally at the Arc, we took in it’s beauty, stole a few photos, and decided to Uber back to our room. 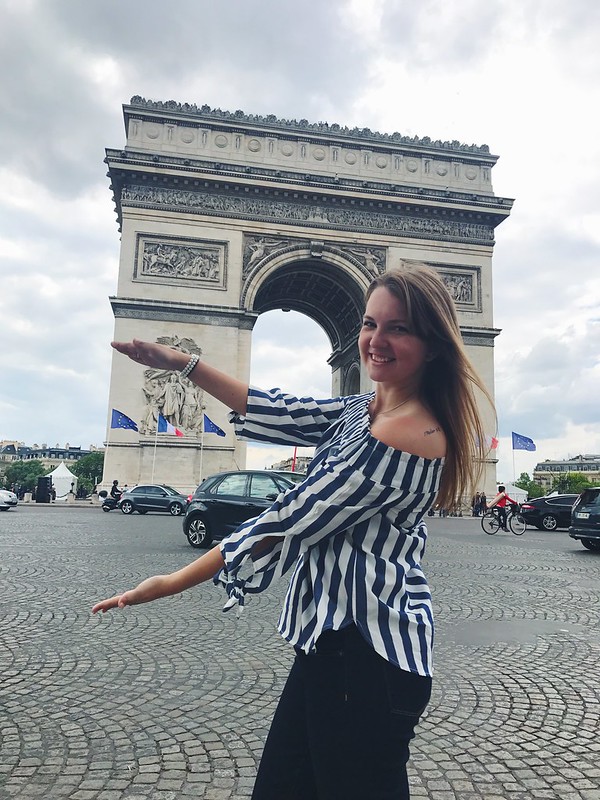 We made it back to the Air BnB, freshened up and charged up! Once ready to take on the city again, we both made our second outfit changes and took the lift back down to the streets of Paris. We walked some more, and even passed the Dôme des Invalides. Eventually we found our way to the Eiffel Tower, and sat on the grass to bask in the glory of it. As the sun started setting and the air started chilling, we made a decision to find some dinner. We Yelp’d a local restaurant and enjoyed some of the best food of our trip abroad thus far—especially the desserts!

We took back to our room, and waited for the Tower to twinkle again. We slept for the longest time we’ve been able to on the trip so far, and woke up slightly later than planned. We got dressed with hopes of no outfit changes, and left for the city again. 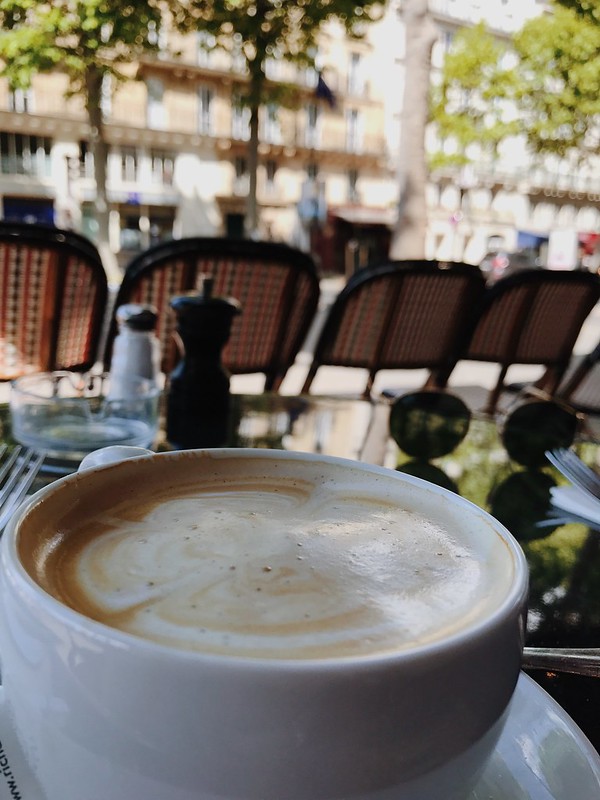 We stumbled upon a little cafe with a slight view of the Eiffel Tower. If you’ve never been to Paris, they set up their tables with the two people sitting on the same side of their table and facing the street. It is a very relaxing feel as we sat and enjoyed our breakfast. Alexa favored another croque monsieur while I chose a more traditional French breakfast: crepes.

Because there just wasn’t enough sugar on my crepes, we decided to take our chances with Ladurée again. We were running a little low on time as our Air BnB checkout appointment was quickly approaching, so we decided to take an Uber over. Thank God we did because as soon as we got into the car, it started pouring! We took our short ride over to the Champs Élysées where the road ended up being blocked for a parade. We ran through the rain as marching bands paraded down the street, leapt into Ladurée, and picked out the perfect six macarons. 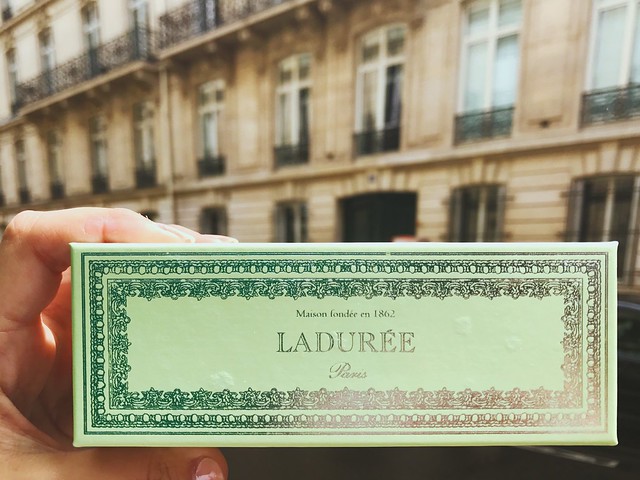 Again, our checkout time was coming quick, so we couldn’t stay to watch the rest of the parade. We hopped in a new Uber, rode back to Rue Saint-Romain, grabbed our bags, and headed to the airport. We arrived at the airport seven hours before our flight, and went straight to Starbucks to work on our paper over some coffee. Our drinks weren’t exactly what we ordered (hello again, language barrier!), but it got the job done!

Though my time in Paris was short, I wouldn’t trade it. The city is truly beautiful, and I recommend everyone making it over at least once! I did not accomplish everything on my Paris points of my Bucket List, but that just gives me a reason to get back one day. Coming for you soon, Disneyland Paris and Rue Crémieux!

Until then, au revoir!